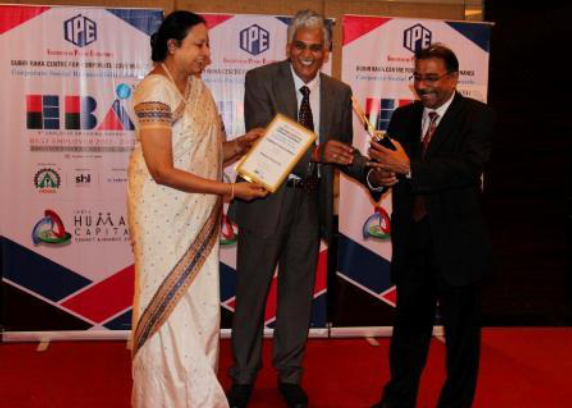 Muthoot Finance was honoured with twin Corporate Social Responsibility Awards (CSR) – “Return to Consumer” and “Community Development” at a glittering ceremony held at Taj Deccan in Hyderabad. The awards constituted by Institute of Public Enterprise (IPE) & Subir Raha Centre for Corporate Governance was presented to Muthoot Finance in recognition of being a responsible corporate citizen and providing their valuable contribution in bringing about a difference to the people and the community at large.

IPE is an autonomous, non profit society which undertakes a systematic and sustained study of issues relevant to the formulation of policies pertaining to Public Enterprises across various industries. The Institute is headed by Dr. VV Ramanandham; former Secretary, Department of Science and Technology, Government of India; Former Secretary, Department of Ocean Development, Government of India; Chairman, Atomic Energy Regulatory Board and former Vice Chancellor, University of Hyderabad. He has recently been appointed a Member of the Atomic Energy Commission, Government of India.